A PRESTIGE HOUSE. .. True memory of the medieval past of our region and close to the Domitian Way, the Commandery was born in the 12th century thanks to the Knights Templar. Rebuilt in the 14th century by the Hospitallers, it took its definitive form in the 16th and 17th centuries. Templar house then owned by the Knights of Malta, it was sold as national property during the Revolution. Today fully restored, the house has found its elegance and superb while retaining the architectural elements that make the soul. It shelters in it a vault dedicated to the starry vault of gold. This castle with a human dimension near Montpellier and the sea offers five beautiful guest rooms.


Learn more about the history of Launac-le-Vieux
The domain

It was at Fabrègues in 1175 that the Knights Templar settled in Launac. The Templars settled in part on lands of the parish of Mujolan given by the Bishop of Maguelone. Their house with chapel still exists (Launac le Vieux).They attached their name to the sanitation of the pond of Coculle. They dug a large canal: called "La Capoulière des Templiers" to drain the pond water from the pond to the stream of "Garelle". Soils drained became culturally appropriate. The Templars of Launac devoted themselves mainly to the culture but they also filled in the vicinity of the missions of surveillance and safeguarding. The Commandery was born in the twelfth century thanks to the Knights Templar. Rebuilt in the 14th century by the Hospitallers, it took its definitive form in the 16th and 17th centuries. Templar house then owned by the Knights of Malta, it was sold as national property during the Revolution.

The name of Launac comes from a Gallic man name + suffix: acum.
It would be a large agricultural estate (man's name: Launus). In the middle was a large pond called the Coculse Pond.

We can very well notice this strong depression between Launac the old man; Launac St André and La Barthe estate.Various documents mention next to this pond, a barn (or farm) Granouilleres. It is about in 1175 that the Templars arrive to settle in Launac The bishops of Maguelone gave them lands on the parish of St Médard de Maguelone for the descent of the herds. The commandery of Launac depended on the commandery of St Gilles (Gard).

It was essentially an agricultural property. The Templars will see immediately the interest they would have to drain the pond both from the point of view of public health and culture. They undertook this big work with the simple means of the time, that is to say with the force of the wrists. They dug a big trench to evacuate these stagnant water to the nearby La Garelle stream, this trench carries in the country the name of Capouillère des Templiers (cap of the patois cap: head - head stream which collects others). So they highlighted this huge depression once mare pestilence
We know the famous lawsuit brought by the king philippe bel to the Templars and the condemnation by Pope Clement V.In the famous night of 13 October 1308 the Templars were arrested throughout France. Some managed to escape, the others imprisoned and sometimes after summary judgment, sentenced to the stake as was the case of the grand master of the order Jacques de Molay who assigned the king and the pope to the court of god for the year In progress. The king seized the goods of order and mainly money. What happened to the Templars of Launac in particular we do not know. But their lands like most goods of the order passed to the Knights of St. John of Jerusalem or Order of Malta.

The chapel of Launac seems to represent the characteristics of the 12th century architecture. The vault presents a strange sculpture with 21 elements, would it be the figuration of the cross of St Andrew, patron of the chapel and the house of Launae? According to the canon Segossdi, historian of the diocese of Maguelone, the Templars founded the church and the parish of St. Andrew of the work of the church of St John Clapas The cross of St Andrew and its famous formula:By this sign you will go, written in Greek, was on one side of the building. The Capouillère cuts the national road (old road from Montpellier to Pèzenas) up to the area of ​​St André. The passage under the road required a very neat device, unfortunately since the repair work it is no longer visible. During this repair the engineers were struck by the regularity given to the slope for the flow of water and said: Today we would not do better. Thus the Capoullière Templars all lined with rolets (small streams) perpetuate in the plain of Launae the honor and the benefits of these monk soldiers that men have a little forgotten. Thus the knights of St John of St John of Jerusalem or order of Malta remained owners of the place until the revolution. In 1792, this beautiful property was sold as Ben National. It comprised between arable lands and meadows approximately 500 hectares. It was first divided into five lots almost all bought by traders from Montpellier (Bazille - Landon - Cambon - Besard - Hue).In the spring of 1794 an army training camp will be set up on these lands, which should supply the army of the Pyrenees commanded by General Dugommier. The various farms around were occupied for the needs of the camp. The Launae of the Templars (known as Launae the Elder) was occupied by a bread oven. The camp was raised in September 1794 because the undisciplined recruits caused a lot of disturbances in the surroundings. At the time of the revolution, there were eleven shepherds at Launac for the flocks.
Subsequently the domain has been broken up into numerous parcels.

The Commanderie de Launac-Le-Vieux guarantees you a relaxing and warm stay. Jean-Paul will invite you to share the atmosphere of this house. The stone staircase and medieval architecture will take you to your room. The decoration is neat and refined, the luxurious en-suite shower room and the comfortable bedding.

In the morning, enjoy a tasty breakfast made by Isabelle, the enthusiastic hostess.You will begin your day on the lush garden terrace surrounded by palm trees, banana trees and lush plants. Unless you prefer to settle in the guest room, a veritable vestige of the 12th century that will seduce you with its charm and privacy. This vaulted room with its stone sink and ancestral fireplace will invite you to relaxation and conviviality.

You will enjoy privileged access to a 1,000 m2 swimming lagoon 400 meters from us.


Learn more about the activities of the region

In Montpellier, you will stroll, according to your taste, in the streets of the center with its mansions, inheritance of a rich past commercial, or on the walk of the Peyrou, on the place of the Comedy and in front of his theater, with the museum Fabre, in the Jardin des Plantes, or in the zoo; unless Montpellier the futurist fascinates you with its new districts: Antigone, Odysséum, the Planetarium, ... Montpellier is also a large city congress;many cultural events and music festivals take place there.
A ¼ hour from Launac, you will have the opportunity to swim on the quiet beach of Aresquiers located in a natural and protected area.
At 1 hour from Launac, you will have the pleasure of discovering Arles and the Camargue: Aigues-mortes and Saintes-Maries de la Mer, the village festivals and their bullfighting traditions, the bullfights for the afficionados ...
The Cevennes are close: Anduze, its pottery and its bambouseraie, Uzes, St Jean du Gard and its aquarium, the museum of silk, the little Cevennes train; the glassmakers of Claret and the glass factory of Coulobrines.
You will be able to visit Roman remains: the site of Ambrussum in Villetelle, Pond of the Gard (1 H 15 of road), Nimes and its archaeological treasures, Loupian, Agde and its museum ...
Lovers of nature and underground tourism will be spoiled for choice between the Gorges du Tarn, the Herault, the Grotte des Demoiselles, the cave of Clamouse, the abyss of Bramabiau.
At the gates of the Hérault gorges, you will be surprised by St Guilhem-le-Désert, picturesque village, with its Cistercian abbey and its way to Santiago de Compostela which sinks into the hills. On this road, you will pass Saint Jean-de-Fos, village with many talented potters.
In the middle of the volcanic lands is the lake of Salagou.
You will also be able to admire the sumptuous landscapes of the footpaths of countries marked out by the French Federation of Hiking.
The Languedoc coast grazes all along its coast its seaside resorts (La Grande Motte, Palavas, Cap d'Agde, ...) and its many ponds lined with fishing villages (Bouzigues, Méze and its ecosite), Sète, its port and its famous nautical jousting tournaments, ...
The Thau basin, specialized in oyster culture, will allow you to enjoy them accompanied by Picpoul de Pinet.
The Languedoc terroir offers you excellent wines that you can enjoy during cellar visits. The winemakers will welcome you with cordiality.
There are many quality restaurants near Launac.
The bargain hunters will go to Pèzenas to find the most unexpected and unusual objects from many antique dealers and second-hand dealers.
If you like historical excursions, you can go to the famous city of Carcassonne (1 H 30 drive) and visit some Cathar castles.
Your stay at the Commanderie could encourage you to discover other Templar sites on the Larzac plateau
(1 H 15 from home): The Couvertoirade, Sainte-Eulalie-de-Cernon, The Cavalry, ...

to see, to do around 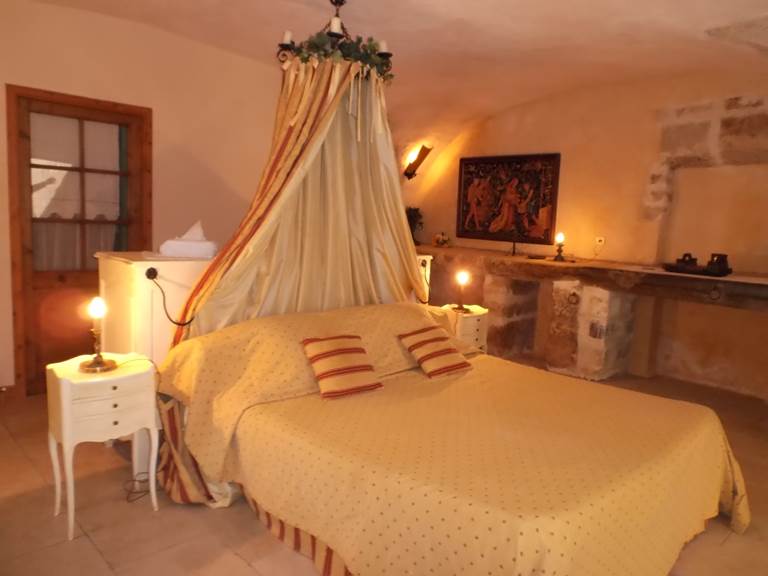 Beautiful room on the ground floor with private bathroom. A large bed 180x200 surrounded by a beaut... 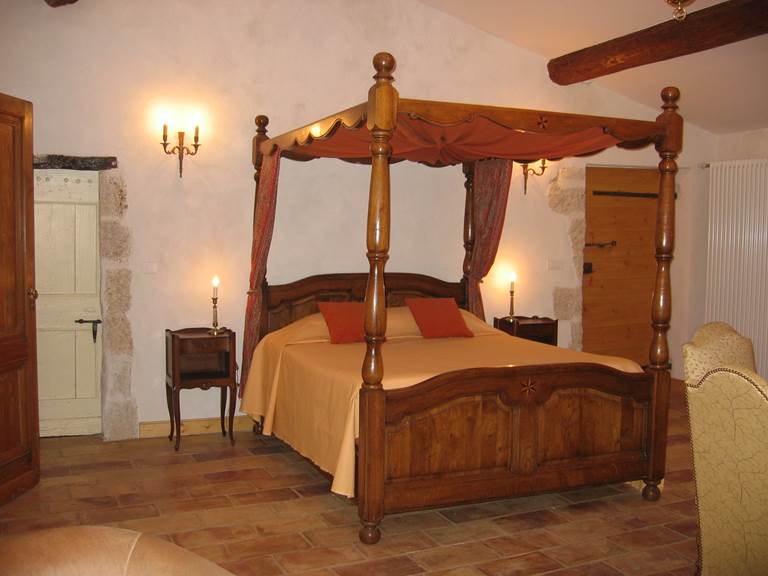 This large room is located on the first floor, independent access by a wide staircase from the inner... 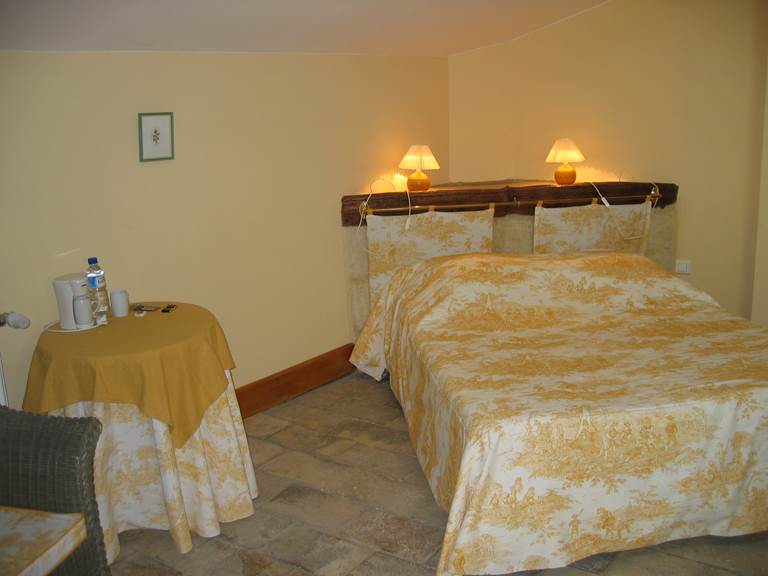 Room with velux, located on the second floor by a beautiful stone staircase, this staircase is not... 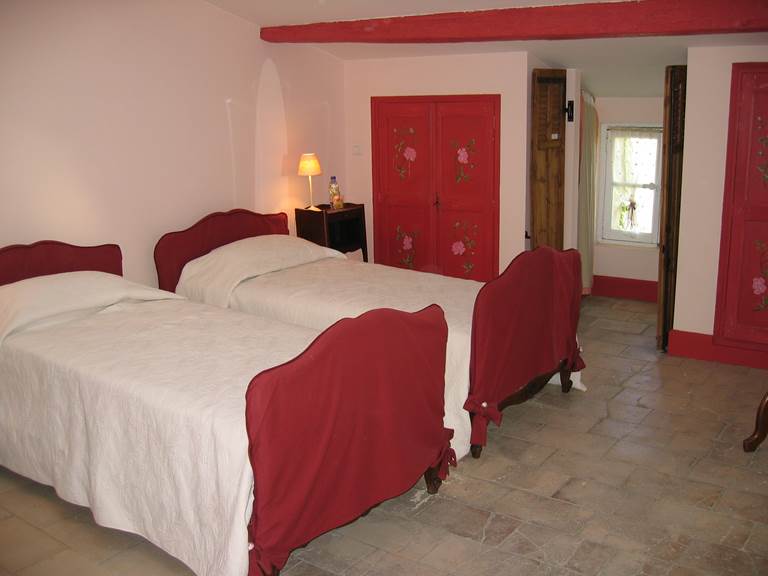 Room on the second floor accessible by a beautiful stone staircase, difficult to access for people...

This charming room is located on the second floor, independent access through the interior garden.

Your Comfort, Our Services

All the news
Receive news and special offers by e-mail